Get Your Gold Out of the US

It is really an amazing time in history to be alive.  I remember when I was younger I always wondered what it would have been like to be alive during the Weimar (Germany) Republic’s hyperinflation or during the rise of the Nazi party in Germany.  I was so curious to understand how so many Germans could have allowed such an ideology to become so rooted in such a developed, modern culture.

Well, I am getting my wish, so to speak, in that everything the collapsing US government is doing nowadays is just as amazing in terms of the bizarre things that people in the US just accept as being normal. 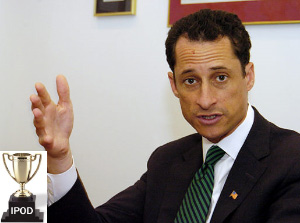 Weiner sent out a press release recently stating, “a September 23 hearing of the Subcommittee on Commerce, Trade, and Consumer Protection (a subcommittee of Rep. Henry Waxman’s Commerce Committee) will focus on “legislation that would regulate gold-selling companies, an industry who’s [sic] relentless advertising is now a staple of cable television.”

Funny, we were just thinking the same thing about political ads.

But the Constitution is a long forgotten piece of paper and so this comes as no surprise.

And furthermore, why in the world does Anthony Weiner think he needs to protect the American populace from ads on TV offering to sell gold?  Was he elected on his strong stance against advertising for gold on television?  Is this a major problem that only he can deal with?  Apparently he thinks so.

For TDV subscribers, the government beginning to crack down on the sale of gold is no surprise.  We have made many comments to this effect in recent months.

What this does tell us, however, is that the US Government is moving full-steam ahead on currency controls and regulation, and likely taxation, of any buying or selling of gold.

And so if you live in the US and you have not made preparations to diversify your gold & silver bullion outside of the US, time is running out.

Every month in the TDV we have news and information on all these issues and advice on the best ways to hold precious metals outside of the US or your country of residence in locales with much more freedom and property rights than the US.  Subscribe today, it is only $15/month for the Basic subscription and $25/month for a Full subscription with specific portfolio recommendations and alerts.  And you can unsubscribe at any time.

We are right in the midst of  a collosal change in the monetary system that was enacted less than 40 years ago with the post-Bretton Woods system.  A system that is in collapse and will see a massive change in the coming months and years.  During this change many who continue to hold fiat currencies and government debt such as the US Dollar and US Treasury Bonds will lose everything while those that protect themselves will save their wealth and be the new “rich” who have the capital available to invest in new industries in the new economy that will soon take its place.

Representative Anthony Weiner is warning you to make plans to diversify your assets and get the majority of your wealth outside of the US today before it is too late.  In that respect we are listening to him.

Have a great weekend,