Iranian President Mahmoud Ahmadinejad made a speech at the United Nations today wherein the great majority of things he stated are correct and, to many, common knowledge.

Yet delegates from the United States, Britain, Sweden, Australia, Belgium, Uruguay and Spain walked out on the speech.

You can see the speech and read the full transcript of the speech here: http://dandelionsalad.wordpress.com/2010/09/23/mahmoud-ahmadinejads-speech-at-the-united-nations-transcript-sept-23-2010-2/ .

I normally couldn’t really care less what any politician says and most certainly at the center of one of the biggest destroyers of wealth, peace & prosperity on the planet, the United Nations.

But upon hearing that so many delegates had walked out on the speech I thought I’d take a read through and see what unbelievable vitriol Ahmadinejad spouted that so angered these slimeball bureaucrats.

I won’t go over the entire speech, as it is quite long, but will make some points on the most important parts.

After giving some platitudes to the lives lost in the Pakistan flood he made his first interesting statement, “After about one hundred years of domination, the system of Capitalism and the existing world order has proved to be unable to provide appropriate solution to the problems of societies.”

Now, if he is referring to Capitalism as “the free markets”, he is wrong here.  Because the entire planet hasn’t even come close to having free markets ever since the advent of nation states and governments.

However, if what he is referring to as “Capitalism” is the unbacked fiat currency monetary system where the price of money (interest rates) is controlled by a central bank, then we agree with him wholeheartedly.

Either way, whatever his definition of Capitalism, it isn’t something where someone should feel the need to stand up and walk out on the speaker for these comments.

He then blathers on about some religious-type things and recounts the past 2,000 years of human history.  Nothing too new here.

And then he gets to 9/11, which he said changed the world dramatically.  Which it did.  Here is his quote:

“Almost all governments and known figures strongly condemned this incident. But then a propaganda machine came into full force; it was implied that the whole world was exposed to a huge danger, namely terrorism, and that the only way to save the world would be to deploy forces into Afghanistan.”

It was said that some three thousands people were killed on the II September for which we are all very saddened. Yet, up until now, in Afghanistan and Iraq hundreds of thousands of people have been killed, millions wounded and displaced and the conflict is still going on and expanding.

I guess, then, this is the part that may have upset some of the people.  He then states that there was not a thorough enough examination of 9/11.  This is for certain.

Ahmadinejad then states the following:

1- Would it not have been sensible that first a thorough investigation should have been conducted by independent groups to conclusively identify the elements involved in the attack and then map out a rational plan to take measures against them?
2- Assuming the viewpoint of the American government, is it rational to launch a classic war through widespread deployment of troops that led to the death of hundreds of thousands of people to counter a terrorist group?
3- Was it not possible to act the way Iran countered the Riggi terrorist group who killed and wounded 400 innocent people in Iran. In the Iranian operation no innocent person was hurt.

All totally reasonable and correct comments.  Within days of 9/11 and without any substantial proof the US, instead of conducting a crime investigation, announced a war against “terrorism”.  It then went on to attack and occupy two countries who appear to have very little to do with what happened that day in 2001.

He then goes on to talk about the atrocities committed in Palestine.  Rightfully so, again.

And then he makes some comments on nuclear power and arms.

Absolutely none of these things are “walk out” worthy.  In fact, considering Obama kept campaigning on his “we will talk to them and try to find a solution rather than attacking them” mantra, Obama and the US administration showed once again that it was all just rhetoric and lies.

I’d be much more apt to walk out on any Obama or Bernanke speech than this Ahmadinejad speech.  He brought up some excellent points about how a serious investigation has never been conducted into 9/11 and how this event has caused the murder of hundreds of thousands in Iraq and Afghanistan by the US military.

And as for 9/11 itself, there is a huge amount of people around the world who don’t believe the “official” story that Osama Bin Laden conducted the attacks from some caves in Pakistan.  You can see the figures in the chart below (taken from here: http://en.wikipedia.org/wiki/September_11_attacks_opinion_polls). 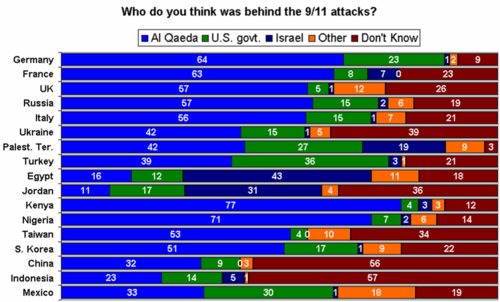 That is hundreds of millions of people who don’t believe Osama bin Laden or Al Qaeda were responsible for 9/11.  You can add me to that list.

While I can’t say for sure what happened that day there is one thing I am 100% certain of: many of the stories given to us by the American government make no sense whatsoever.  To see a full listing of all the issues and many of the holes in the story, check out this excellent documentary called Loose Change:

The documentary shows literally hundreds of things that were never talked about, investigated or debated after 9/11.  Also, an excellent summary of many of the unresolved issues surrounding 9/11 can be found here: http://www.prisonplanet.com/establishment-feigns-outrage-at-ahmadinejads-911-rant.html

The fact that Ahmadinejad is pointing out that we were never told the whole truth about 9/11 and that it has resulted in two wars/occupations that have cost trillions of dollars, is bankrupting the United States and has killed hundreds of thousands of Iraqis, Afghanis, Americans, Canadians, British, Germans and more is cause for a standing ovation.

Don’t get me wrong, I am no big fan of Ahmadinejad nor any other politician.  What the Iranian government is doing to its citizens is despicable and horrendous.  But there was a lot more truth in that Ahmadinejad speech than in most I’ve ever heard from Obama or Bernanke.

Meanwhile, in the world of finance, gold hit yet another all-time record high today of $1,294.95 and our stocks continue to massively outperform the major indexes.