Another day, another all-time high in gold.  What a run it has been for the last two months.

Remember how gold used to act for what seemed like forever? Up until last month gold would usually meander around and then suddenly spike up, or down, $20-$50 in a day.  It was extremely volatile.

Well, take a look at the gold chart for the last two months.  I’m not sure I’ve ever seen such a long, steady, grinding higher of any stock, currency or commodity without so much as a $10 move lower at any point in the rise!  And now it is just day after day of all-time highs. 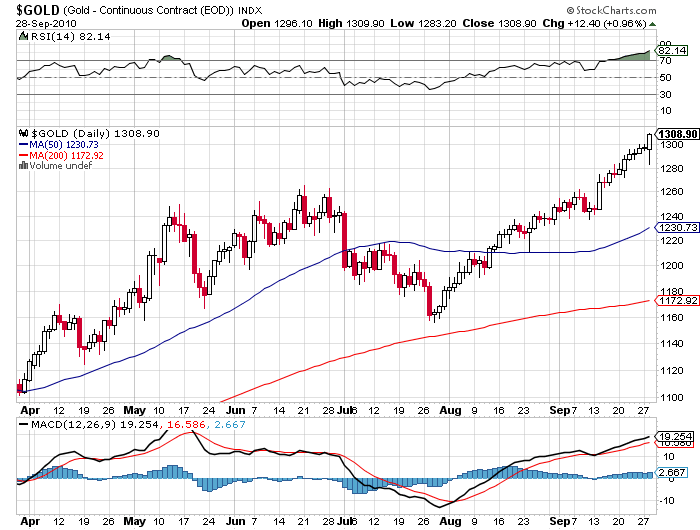 However, as we pointed out in our September 24 blog post, this is actually much more a story of the collapse of the US Dollar than a rise in gold as gold has not made new highs in most other currencies of late.

Look at this chart of the US Dollar Index.  It has completely fallen off the rails since June and thanks to Ben Bernanke September was a complete disaster for the US Dollar. 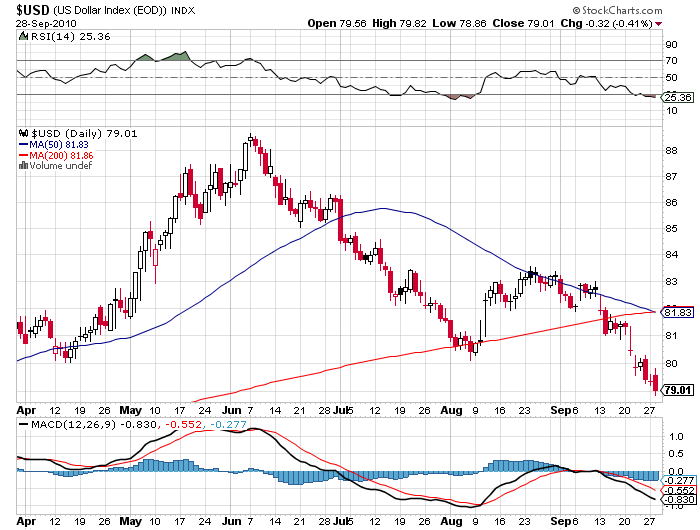 Meanwhile, the Toronto Stock Exchange Venture index, which is a good proxy for the small junior mining sector, has been stellar along with the collapse of the Dollar and the subsequent rise in gold.  However, notice, just in the last few days its stellar rise appears to have stalled and looks to be about to curve down.  Considering that it appears to have stalled while gold has gone on to make new highs may be indicative of a pullback in the junior mining shares ahead.  This, by the way, would be completely healthy after the stunning rise in all of our stocks since early August. 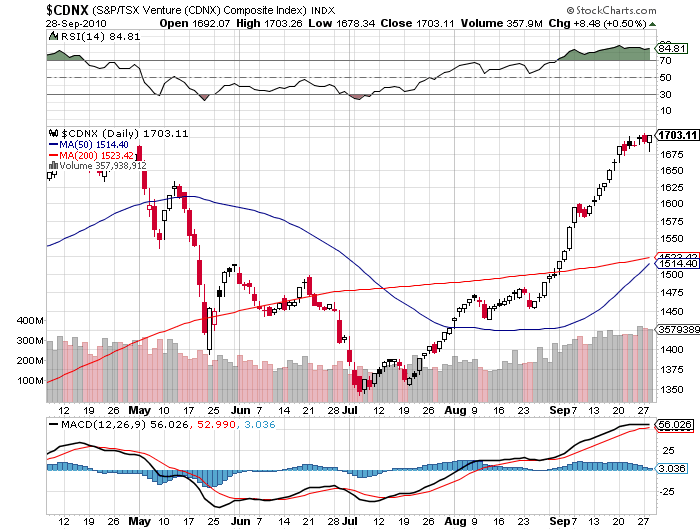 And so, we’ll keep an eye on that divergence.  But other than taking some profits on some of our stocks that have made 100-200% moonshot gains in the last 2 months we are not looking to try to time ourselves in and out of the market even if we foresee a small pullback in the junior miners or in gold.

The biggest risk that we see at this time is NOT being in this historic gold move.  The last place you want to be at the beginning of a mania is 100% on the sidelines and chasing the train.

In our upcoming October 1st issue of the TDV (available to subscribers – subscribe now for only $15 or $25/month) we will explain in much more detail why we think we are just at the start of what will be a gold mania for the history books.