I received an email from Stefan, a new subscriber, today.  He was traveling in London and he came across some newspaper headlines that he couldn’t help but forward.

It was a front page story in the UK’s Daily Mail stating, “Every Little Helps: Six Year Old Girl Sends Her Tooth Fairy Money to Government To Pay The National Debt“. 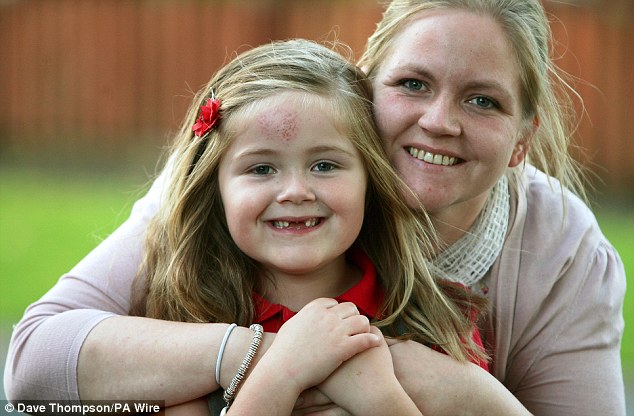 Ah, how sweet, I thought.  That cute little girl got a pound from the tooth fairy.  And she gave it to…. what now??!!

Wow.  Just think about what life must be like for little 6 year old girls in the UK.  They are brand new to this planet and they are already hearing about how they may be subject to lie detector tests to make sure daddy and mommy didn’t avoid paying taxes – for the good of the country, of course.

And on TV they watch as schoolchildren are blown up if they don’t fall into line and subject themselves to self-imposed austerity measures in order to stop the world from ending because they rode in a car to school instead of a bicycle – for the good of the planet, of course.

And now, apparently, kindergarten age children are feeling it is their duty to donate their money to pay off the government’s national debt – something for which they received zero benefit and are obligated to continue to pay off for their entire lifetimes.

Or perhaps Niamh “donated” the 1 pound to the government because she thought if she didn’t declare her tooth fairy income she might get caught on her next lie detector test?

I would have thought the younger generation might feel a bit angry that their futures have been mortgaged for absolutely nothing.  But perhaps its just a cute little phase.  We’ll see how Niamh feels in a few years when the UK has inflated the pound into worthlessness and the economy is in tatters and the millions of government cameras on the streets of London are used to track her like in V for Vendetta to make sure she adheres to all the government rules and curfews.

Let’s hope, for all our sakes, little Niamh rebels as a teenager!

Meanwhile, the march towards making Orwell’s 1984 a living reality theme park marches on.

The UK is about to do its own census and they have announced that there will be a £1,000 fine if you don’t fill out your form .

Oh, that’s ok, you think, it’s just ticking a few boxes.  You can quickly get right through it over afternoon tea.  Think again!  The census is 32 pages long, with 56 questions including questions about your sexual orientation and which passports you hold.  You are also required to provide details on the names, sex and birthdates of any overnight guests you have had in your house.

It’s important for the government to have this information.  Because… Oh boy.

At the very least, if you currently live in the UK, we certainly would recommend you look at getting your assets off the island unless you want to donate them to the government like little Niamh.  And that is really looking like a best case scenario the way the UK is headed.

We write regularly in The Dollar Vigilante about expatriation options for both your assets and for yourself.  Subscribe today for only $15 or $25/month with no obligation to keep on top of the best places to expatriate your ass & your assets.  And if you live in the UK, run do not walk to sign up and find out how to get out of England and where it is safe to go!

Hurricane Ben Is Destroying the Planet

Meanwhile thanks to the manipulation of the currency by the Federal Reserve the markets are reacting in exactly the opposite way they would if we had a free market.

Oh, you respond, then gold must be down since the rise in the DJIA indicates confidence in growth of the economy and that is less beneficial to gold.

What is going on?  The markets are playing the Fed.  The further the economy drops the better the chance of them creating more money in Quantitative Easing II.  And so, as with all things related to the government and the central banks anything they try to do is automatically “gamed” by the markets.  It’s no wonder the government hates speculators so much – they keep messing up all the grand plans of the great leaders.

And all of this just causes further distortions and further malinvestments, destroying more wealth.

No big deal, it’s just stocks and destroying the value of the currency and wealth, you say?

It goes far beyond even that.

Commodities as measured by the CRB hit a two year high today: 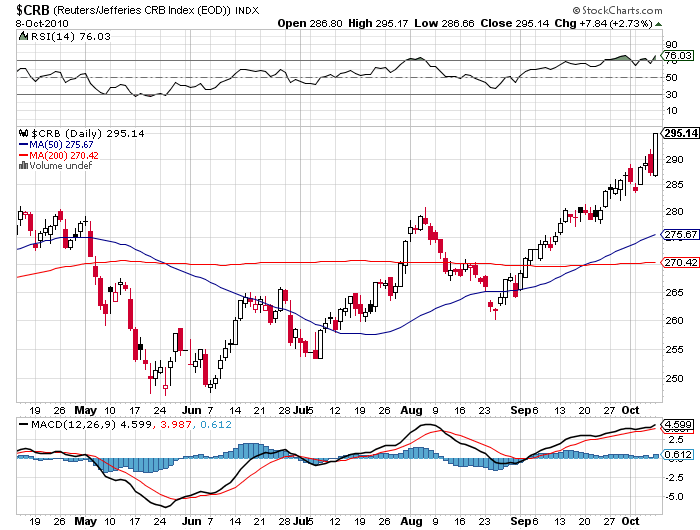 Our subscribers are well positioned in commodites (subscribe today) but, sadly, what this really means is that food prices are skyrocketing.  Corn, oats, beans, rice and wheat skyrocketed today – many of them up lock-limit.  Beans? Rice?  Yes, the food that many of the worlds poor (mostly made and kept poor by central banks and governments) need to survive.

Our subscribers are protecting themselves from this inflation by buying precious metals and agriculture but many in the world will continue to suffer at the hands of Ben Bernanke and his gaggle of Keynesians at the Federal Reserve.

And so, as Ben Bernanke smugly looks into the mirror every morning and thinks his weird science and bogus equations are going to help the world, little does he know, but he has played a big role in impoverishing America and starving hundreds of thousands worldwide.

Someone really should stop him.

And with that, we will bid adieu to this week.  Our financial genius, Ed Bugos, is working on his next junior gold recommendation that will be going out to Full Subscribers in the coming few days.  Join the community of dollar crash survivors at TDV.

Have a great weekend.