In yet another case of “don’t believe anything politicians say”, England’s government is attempting to revive a plan to store every email, webpage visit and phone call made in the UK, despite this being one of the “pledges” made by PM David Cameron in his “Coalition Agreement“.

In 2008, Cryptohippie rated the United Kingdom as the 5th worst surveillance state in the world only behind China, North Korea, Belarus and Russia.  The US ranked 6th.  The UK has obviously set its sights on moving up this list – watch out Kim Jong Il, you’ve got competition.

Meanwhile, recently, a senior Bank of England official responded to angry savers that they “should not expect to live off interest,” and admitted that “low returns were part of a strategy”.

In other words, a senior banker at the BoE admits that he is trying to force people to divest themselves of wealth and to not save.  And he is doing his best to ensure that saving is not possible by lowering rates to near zero.

Meanwhile, our TDV correspondent, Patrick S., was in England the other day and managed to capture 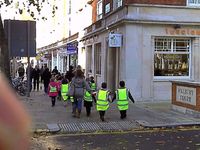 The Brits have a habit of setting up so many warning signs like “Caution Wet Floor” that the danger of falling over one is higher than the actual risk of slipping.

Now it seems that the desire for safety has progressed even further: When running to the gym today, I noticed a group of primary-school pupils on excursion and every single one of them had been turned into a ‘walking warning sign’.

God forbid that one of those kids should get bumped by a car and be injured or, almost assuredly, Mama State will make dressing your kid head-to-toe in neon and perhaps some sort of rigged-up flashing light system an enforced regulation.  Those little tykes represent future tax dollars that will be necessary to be paid to continue to pay off the always growing national debt, after all.

Here at The Dollar Vigilante we try to educate and inform about the necessity of keeping an ever vigilant eye on your government and looking to protect yourself from the neverending intrusions, taxes, regulations and rules that are being thrust upon you and your assets.

Subscribe to TDV to stay informed on the best ways to internationalize yourself, legally and securely, before it is too late.  And if you live in the UK too late was yesterday.