Even just using the US governments own “inflation” index, the Consumer Price Index (CPI), it is clear to see that at no point, since the creation of the Federal Reserve, supposedly to protect the value of the dollar by creating “price stability”, has the US dollar, for even one year, ever not devalued.

From 1800 to 1912 the dollar retained its value exquisitely.  And from 1913 to 1971 it actually wasn’t too terrible.  But ever since Nixon removed the last link to gold in 1971 we’ve been on a rocket ride of dollar devaluation.

The United States would never, ever consider devaluing the dollar for export advantage, Treasury Secretary Timothy Geithner assured an audience of Silicon Valley business leaders in Palo Alto on October 18. “It is very important for people to understand that the United States of America and no country around the world can devalue its way to prosperity, to (be) competitive,” Geithner said. “It is not a viable, feasible strategy and we will not engage in it.” Geithner’s words appeared timed to allay concerns about the U.S. dollar before this weekend’s G-20 meeting in South Korea.?

He actually did get one thing right, however.  “No country around the world can devalue its way to prosperity”.  That is actually correct!  It just makes common sense, you don’t get rich by lowering the value of your money year-over-year.  If you could many Zimbabweans wouldn’t be searching for tiny gold nuggets in streams to buy food.

But until the American people wake up and educate themselves on what is really going on inside the Federal Reserve and their government and have people like Geithner taken away to either jail or an insane asylum they will continue to have their butts sold right out from under them.

Speaking of that, fellow Dollar Vigilante Adam T. forwarded this video to us and we thought it was quite well done and relevant to today’s topic.  Check it out:

Meanwhile, back in reality, the precious metals and related equities have been a bit volatile in the last few days after nearly 2 months of a steady climb.  Gold has backed off about 4% from its high, still well within the 5-10% no-worry range that Ed Bugos stated as being a healthy pullback.

The TSX-V, the Toronto Stock Exchange Venture index, in which many gold mining juniors are listed hasn’t even shown a noticable pullback on its daily chart despite some fairly large intraday dips. 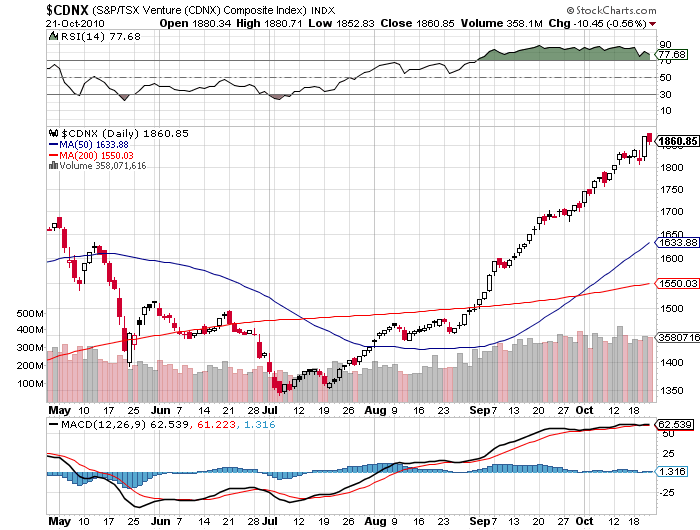 While the RSI on the above chart is and certainly has been in overbought territory for some time now we still don’t see any direct evidence that its rise has come to an end.  A pullback from here below 1800 would be evidence that a pullback had begun.  Until then, we’ll continue to keep riding the wave of gold moving higher and the US dollar moving lower – despite expert testimony from the likes of Timothy Geithner to the contrary.