A Solution for the UK Student Riots

I had grabbed a snack and sat back in my lounge chair to watch the English riots on TV… something I expect to be doing a lot more of in the coming months and years.  It was a good one this week.  A bunch of people calling themselves anarchists, but apparently having no idea what the word “anarchy” means – were angry at the government for raising fees at publicly subsidized schools.

Of course, anarchists, of which I am one, and I can assure you I have nothing in common with these people, are people who want to live without a government controlling them or owning them.  This is freedom in its truest sense and here at TDV, we are all about freedom – the most noble of causes.

And so, I was perplexed, why were so-called “anarchists” upset that the government was cutting subsidies to schools?  Any good anarchist is at least somewhat happy whenever government raises its cold dead hand off of anything.  We certainly wouldn’t be lighting things on fire over the concept.

And then I saw one of the signs of many of the protesters, like the one to the right,

which are apparently sponsored by a communist newspaper called “Socialist Worker” and so I looked further into this bizarre oxymoron of “collectivist anarchists” also known as revolutionary socialism.

Here is what Wikipedia states about them, “Collectivist anarchists oppose all private ownership of the means of production, instead advocating that ownership be collectivised. “

Well, there is nothing anarchist about that.  That is communism – pretty much the exact opposite of anarchism.

The further I look into this ideology of collectivist anarchism the more my brain literally melts trying to make sense of this mish mash of concepts.  You couldn’t find a more convoluted, oxymoronic ideology if you tried.  People who try to adhere to this ideology must be shaken awake every night from the massive amount of cognitive dissonance they are trying to carry.

Really, what are these students in England really saying?  What they are saying is that they want the government to use force (police/guns/jail) to make other people pay for their education.  As you can see from the placards, many even seem to be of the opinion that buildings should be built, textbooks written and teachers made to teach them for free. 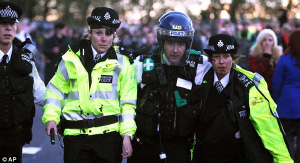 And if they don’t get what they want they will attack poor little women Bobby police officers, who don’t even get to have guns.  Bloody ‘ell!

What a despicable group of people!

I don’t suppose anyone told them that MIT has put it’s entire curriculum for every single department online for free.  If these people really wanted “education” they’d be in front of their laptops right now reading away – and the price is exactly what they are asking for.

But judging from the intellect of this fine young group of people it isn’t real education that they want.  They want to take courses called, “18th century French literature” and sip coffee and banter back and forth amongst each other about what Voltaire really thought of the French bourgeoisie and then spend their nights drinking beer and doing all the other things that college kids do.

Here is my advice on how to handle this uproar in England.  Tell the students school is free and then when they come in for their PHIL481 Philosophy of Feminism course or for THEO357, The Theology of Gustavo Gutierrez (real courses taught under the Bachelor of Arts program) sit them down and trick them into reading Mises “Nation, State and Economy“, Rothbard’s “Man, Economy and State” and “The Market for Liberty” by Morris and Linda Tannehill (all 3 of which are free on the web).

And then teach them the definition of “anarchy” and they will have learned more in a few days than they would have ever been programmed in a public university in 4 years.