TEOTMSAWKI – The End Of The Monetary System As We Know It

Those who spend any time on Survival-themed message boards know the acronym TEOTWAWKI well.  It stands for The End Of The World As We Know It.  And, as anyone who reads those boards know, while some of the scenarios people are preparing for are things like nuclear attacks and electromagnetic pulses (EMPs), most are, wisely, preparing for a collapse of the US dollar based financial system and the ensuing chaos that may ensue.

While the chances of a nuclear holocaust are definitely palpable with people such as George W. Bush and Kim Jong Il having had their fingers on the button, the far greater risk is the collapse of the US dollar based financial system.

Because while the Doomsday clock for decimation of the human race by nuclear holocaust currently sits at 6 minutes to midnight, TEOTMSAWKI (The End Of The Monetary System As We Know It) doesn’t even need a clock.  It is an unavoidable sure thing that is already in process as those living in Iceland, Ireland and Greece can tell you.

Look no further than the recently concluded G20 meetings in Seoul.  All the world’s greatest hustlers, gangsters, criminals, murderers, thieves and liars all went to gnosh on caviar and fine wine in a grand billion dollar meet-and-greet.  And, what did they come up with?

Nothing, of course.  There is no way to save this ridiculous system that should have rightfully died in 1971 when President Nixon reneged on the promise to pay gold for dollars to foreign central banks.

The system is an artificial, non-free market, centrally planned system that, as all centrally planned economies have shown in history, will always collapse as a few bearded school professors with heads full of formulas and concepts can never “guide” the economy like the invisible hand of the free market.  Not even close.

Just listening to career politicians, like French President Nicolas Sarkozy, root around in the dark trying to come up with solutions to save the “system” is a sight to behold.  He states that we must move away from the US dollar as being the sole “reserve currency”.  But there is no law or rule that states that any country or central bank must hold US dollars.  Besides, what did he have in mind to replace it, the euro?  The euro may not even last out the week at the rate things are going. 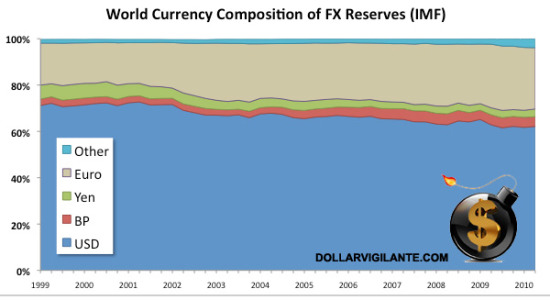 What other options are there?  The British Pound, which currently encompasses 4% of central bank reserves?

Or perhaps Nicolas has a plan where everybody holds warehouses full of everyone’s funny colored paper.  Canadian dollars, Sri Lankan rupees, Ghanaian cedis?  Perhaps by doing that they can make this dismal, wealth destroying system last a little longer.

One thing is for sure, not one of the politicians would like to see something like gold anchor any sort of money system.  An unprintable money simply is not compatible with our modern, progressive democracies of today.

But one of these days, one country is going to break ranks and back their currency with gold & silver.  That will mark TEOTMSAWKI and the collapse of the fiat paper money system will enter the history books as a bizarre, failed experiment.