Explaining the Government Shutdown to the Woman with the Sign

I’m writing in from freezing, cold Chicago O’Hare airport, en route from Mexico City to Calgary today.  I had a few hour layover and scanned through a number of my usual sources of info which I usually get through my RSS reader that I use at Google Reader.  For those interested, here are a few of the feeds I receive and are part of my daily reading:

There are dozens more, of course, but those sites alone give me all the news and analysis for 90% of the things I am interested in that I need.

After I check those more reputable sources of information I then usually like to take a peek at what the cattle are grazing on, so I flipped by CNN.com.  I haven’t paid much attention to the “US Government shutdown” which is all over the front page of CNN.  The reason is, when you have a bunch of politicians fighting over whether or not to continue on with a gargantuan government (whose bills can be paid by printing money), or not, you don’t have to be a genius to know that they will ALWAYS find a way to keep the money flowing.  Sure, they may even “shut it down” for a few days, like in 1995-1996, but it’s theatre.  But, they wouldn’t go away if you hit them with a rake, don’t worry!

The image that caught my eye today, however, was the following from the front page of CNN: 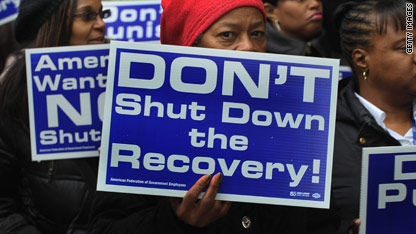 “Don’t Shut Down the Recovery”?  Are you kidding, lady?  First of all, no such thing as a recovery exists.  Government GDP figures have no basis in reality in terms of trying to gauge the real growth of an economy… but there are definitely other indicators of how things are going that have some value.  Unemployment figures can give you at least some idea of how things are going.  Even if you take the lies the government feeds you (the red and grey lines), where is the “recovery” there?

Oh yes, I forgot.  It’s one of those tricky “jobless” recoveries!  You’ll believe anything they say on that boob-tube, won’t you!  How can I explain it to you?  You look like you might like basketball… let me explain it this way… If I told you the Lakers beat the Heat, tonight, but told you the final score was Miami Heat 101, LA Lakers 0, you would think I was crazy.  And if I told you the Lakers won in a ‘scoreless’ recovery, you’d think I was a fool, right?  Well, that’s you, when it comes to understanding economics.  So, put the sign down and go home.

I shouldn’t be so rash with you.  I apologize… I’m in a bit of a bad mood, I just spent half an hour with some of the Government henchmen of the TSA while they asked me about my underwear.  Let me try to explain it to you another way.

Let’s say we live on an island and it is just the two of us, god forbid.  I fish all day and you.. well, I’m sure you can do something… let’s say you make cookies all day.  At the end of the day I like to give you some fish in exchange for cookies and vice versa.  And everything is fine.

Now, let’s say, one day, we decide we need a ‘government’ to oversee us (your idea, not mine, obviously).  So, we call over another person from another island and we tell him we want him to take (and eat) half our fish and half our cookies and, in exchange, he will oversee us and make sure we feel safe and will also “manage” our economy.

Now, because of this, we have a lot less fish and cookies.  So, we are in a ‘recession’.  We complain to our new government that we need more fish and cookies.  He has already eaten them but he smiles a lot and comes up with some plans.  He tells us that he is going to start a new green energy economy which will create jobs.  But, of course, he has nothing of his own in which he can contribute, so he takes more of our fish and cookies and sells them and with the money he gets he pays us to build some windmills… which also results in us producing less of the cookies and fish we need to survive… so we likely end up dying of starvation but have some windmills.

Now, are we better off than we were before?  Of course not.

Is the government “creating” the recovery?  Of course not.  It is just taking some stuff from us and redistributing it, in a non-free market fashion, to things they have an interest in – and which usually isn’t profitable or of any value, or else a private company would have done it.

So, sign-lady, in actuality, the best thing you could do if you really want a “recovery” would be to get rid of the government’s involvement in the economy.

But, and I am just guessing here, you likely are a recipient of some government largess and some political group probably just handed you that sign… so, in that case, a government shutdown would hurt you personally, at least in the short term… and that’s probably why you are here on my computer screen today.

But, you should just be honest and hold up a sign saying, “Give me money!”.  Then, at least, I’d have some respect for you.