Why Do Fascists Fight Communists? They

A friend pointed me to the documentary Apocalypse: The Rise of Hitler from National Geographic the other day. Being somewhat slow I sat dazed as I watched it!  These images were enthralling… glorious!  I’d never seen anything like them before… how was that possible?  I quickly posted my question on Facebook and numerous of my much more intelligent friends noted that color film really didn’t exist at the time of most of the footage so it must have been colorized.  I sat feeling stupid for a few moments and then returned to the documentary.  It really is incredibly well done. The colorization made the events seem more recent and much closer to home.

In the documentary, one of the things that really struck me was the fascists’ hatred of the communists. The first people the Nazis put into concentration camps when they came into power were communist party members. And of course communist Russia was the great enemy of fascist Nazi Germany (note that Nazi is short for the National Socialist party, but they were much more fascist by action than socialist).

But I was confused.  Why were these two totalitarian systems at each others’ throats in the first half of the 20th century? It was sort of like Skeletor fighting Hordak. They both wanted total control of their subjects’ lives. The differences between fascism and communism are pretty subtle, especially to the anarcho-capitalist mind. Those differences amounted to issues of nominal ownership in a system of complete control by the state. 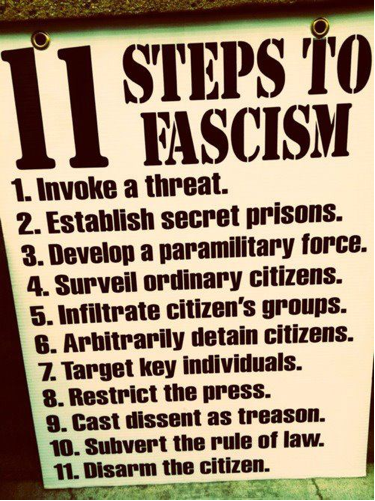 Fascism is collectivist along national lines and it puts the state above the individual. It holds that the individual is better off when bundled together into a collective. In fact, the word fascism itself is derived from the Italian word for a bundle of sticks.

Fascism is inherently anti-capitalist. Capitalism is the economic arrangement that comes out of liberty. Liberty—and its economic arrangements—are anathema to fascism. Fascists let people keep their own property, both the means of production and the consumer goods produced by those means. But fascists tell everyone what they can do with their bodies and their stuff. In fact business under fascism is automatically corporatist; because business has no choice but to collude with government.

Communists hate property. They think it’s authoritarian. Their goal is to abolish private property. But of course in order to do that, you need an all-powerful state. And while people think mostly of jackbooted thugs, attempts at world conquest, and ethnic cleansing of fascism’s moustachioed poster boy, the fact is the communists killed far more of their own people than were killed by the fascists in war. Communist China alone killed about 65 million of its own people. That’s 5 million more than died in World War II.

Again, fascist regimes let businesses and people keep their stuff. Communists let no one keep anything privately. Both philosophies require an all-powerful, totalitarian state to apply violence to get people to do as they’re told. Fascists openly admit that fact, while communists insist they want a stateless world. Thing is, in a stateless world private property and voluntary exchange of that property and of labor would flourish. (That’s why we often get so annoyed with communists who call themselves anarchists—anarcho-communists—because it’s not possible.)

Don’t fall for it when people talk about “mixed” economies. When the state runs businesses through laws and regulations that is a fascist situation. That’s the funniest thing about fascism. It is such a pejorative term because of Mussolini and Hitler. No one will admit to being fascist, but almost every nation on the planet is fascist. That’s what the “mixed” economy is. It’s just plain old fascism: private ownership of capital and consumer goods with strict state control. You don’t have to have jackbooted thugs and concentration camps in order to be fascist. You just need the state telling everyone what they can do with their stuff.

Fascism tends to breed nationalism, however. As a strictly economic term fascism just means state control over “private” property. But it’s in the state’s nature to grow and for the slaves in the state to suffer from Stockholm syndrome. They come to identify with their captors, to accept their dependence and helplessness, and to rationalize their abuse at their captors’ hands. The nationalism of fascist philosophy is inherently tribal (on the national scale) and tends to be very concerned with purity for the sake of unity. That’s why racism and democide come so easily to fascists.

The US started out as a fairly capitalist place, but has become increasingly fascist over the years. You can look at the New Deal as an acceleration in that process. Ironically that came around the same time fascism was spreading from Italy to Germany. The US was mostly free of the jackbooted thugs for most of that time. But anyone who has been paying attention knows that the surveillance police state, the kind of thing most people envision when they think “fascist”, is kicking into high gear.

Fascism isn’t “coming” to the USSA. It’s already here. It has been here for a long time. Pretty soon it’s not going to play as nice as it has been. Eventually the fascists are going to need a group to persecute vigorously. These days Jews and homosexuals are off limits. We suspect that this time it will be poor people (already it is illegal to feed the homeless in many cities), certain illegal aliens, and libertarians who get rounded up into concentration camps. The illegals will provide a convenient scapegoat for economic woes while the libertarians will be labeled dangerous ideological enemies of the state and potential terrorists.

To make matters worse, not only is the USSA fascist but it has also taken on some of the worst ideas from communism, like central banking, government-controlled education and heavy taxation as we pointed out in the article, “The Fasco-Communist Police State of America”.

This underscores the point that even though fascism and communism are ideologically opposed, along with socialism they are just flavors of statism.

In the end, a society is either collectivized and authoritarian or it is individual and free. So it’s amusing for us to watch the fascists fighting the commies out on the streets of Berlin when they both really wanted the same thing. It’s as silly as watching Republicans argue with Democrats. Both just want a bigger state. The fascists and Republicans love the idea of nominally private property, but for them both it is the war-ready nation-state over all that matters the most (U-S-A! U-S-A!). The socialists, communists, and Democrats may be less nationalistic, but they long for the all-powerful government that can “redistribute” everyone’s property.

Note that capitalism stands apart from all these different statist flavors. But these days in the minds of the state-indoctrinated sheep, capitalism is a system of favors doled out by the state to banks and corporations.

That’s why we love the great Murray Rothbard’s combination of the words anarchism and capitalism. Real capitalism is inherently anarchist with no state infringements on private property. You could argue that the state needs to exist in order to provide impartial judgments and to provide protection (a minarchist capitalism), but the state has proven over and over that it just cannot stay in that box—the US being the prime example. It must grow and seek more power. The state even in minarchy is monopoly on the use of force. It is pure coercion and coercion can’t keep playing nice for very long. Best to leave everything—including arbitration and protection—to private property and willing exchange.

The concept of voluntary exchange and truly private property free from government meddling is so alien to most westerners, even offensive, that you really shouldn’t count on less fascism in the future. Your friends and neighbors will be just like the Germans cheering their heads off as a totalitarian savior ascends to power. 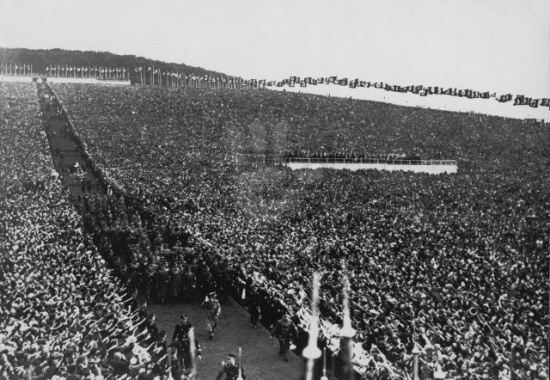 Once a nation is this far down the path to ruin there is no stopping it. It seems to be nature’s way. Don’t think for a minute that there is anything you and all your liberty-loving compatriots can do to break this momentum. You are a miniscule minority and have the force of hundreds of millions of your fellow citizens against you, half-crying for totalitarian fascism and the other half for totalitarian socialism or communism. Their minds, addled all their lives by state propaganda, are beyond saving.

If you’re going to stay in the US, limit your contact with them in order to keep your sanity. If you can get the hell away from them now, we highly recommend you do so.

Protect yourself now.  Subscribe to The Dollar Vigilante, the only newsletter whose express focus is info, news, analysis and advice on how to survive The End Of The Monetary System As We Know It (TEOTMSAWKI).