[The following post is by TDV Chief Editor, Jeff Berwick]

Well, here is something you probably never expected.  After more than half a decade here railing against the evils of government I am, as of today, announcing that I am running for government!

In the last five years I have been here at The Dollar Vigilante (TDV) trying to help people with information, advice, analysis and services to help free themselves from government and the ravages of the central banks.

During that time I have also conducted more than 200 interviews on Anarchast with anarcho-capitalists (ancaps) around the world on the topic of how to reduce or remove government completely from our lives.  It has been a learning experience the entire time.  And, what I have learned is that just ignoring the government will not result in it reducing in size or disappearing entirely (unless the great majority of the public decided to ignore the government… which doesn’t seem likely to happen soon).  As I believe someone once said, you can ignore politics but politics won’t ignore you.

In recent months I have been convinced by a number of anarcho-capitalists that an excellent, and unused way by most libertarians, to affect government, and more importantly to educate the public on liberty, is to get involved in the system itself.

It began in April when I interviewed Judge Andrew Napolitano and he convinced me that Rand Paul was a true libertarian and should be supported. That thought simmered until I interviewed Mr. Libertarian, Walter Block, and the idea came up that all of us anarcho-capitalists should run under the Libertarian Party banner in Canada for the upcoming Canadian federal election.  Soon after that I interviewed Darryl Perry, an ancap running for President of the US in 2016 and he most eloquently stated all the reasons why we should get involved in the political system.  He countered every argument as to why trying to ignore the system isn’t helping our cause and why getting involved in the system can have a multitude of benefits.  The most prime example being how Ron Paul ran for President and it created millions of libertarians in a matter of a few years in the US.

At that point I was sold on the idea and very quickly I picked up the Skype to the leader of the Libertarian Party of Canada, Tim Moen, who is also an anarcho-capitalist (and past Anarchast guest), and the deal was sealed.

Tim Moen, who I call the “Ron Paul of Canada”, joined me on today’s episode of Anarchast to talk about why this is important. 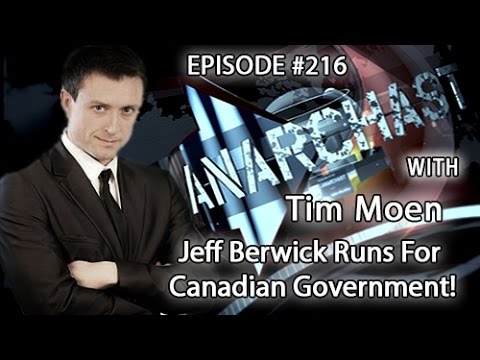 I intend to fully shake things up in the Great White North.  My goal will be to bring as much attention as possible to the Libertarian Party in Canada and its platform (which you can see here).  Now, you may say, part of the platform is to reduce taxes to 15% and that number should be 0%.  I agree with you, of course, but I also know that trying to effect any change is going to have to happen in increments… and I support any and all reductions in the size of government.  In the Libertarian Party’s platform, every stance is one of reducing government and I support that.

Call me a wild eyed dreamer but I actually think the Libertarian Party of Canada can come out of nowhere and win the upcoming election in October (watch the video above with Tim Moen for all my reasoning on this).  But it is going to take a massive effort from all ancaps and libertarians to get out there and make it happen.

I am therefore publicly calling for the following prominent and well known Canadians to also run for the Libertarian Party in the upcoming election:

Stefan Molyneux of the 50 million+ Youtube views, Freedomain Radio.  Stefan is possibly the most well known anarcho-capitalist celebritarian, a past two-time Anarchast guest and a widely passionate and engaged audience that would knock on doors across Canada stumping for the Libertarian Party if Stefan would get involved.

James Corbett of the 25 million+ Youtube views, Corbett Report.  James is an anarcho-capitalist, former Anarchast guest and speaker at Anarchapulco and has a massive worldwide following that he can use to promote liberty in Canada.

Walter Block, Mr. Libertarian.  Walter is an icon in the libertarian community worldwide and him running for government would create waves throughout the libertarian community and congele a movement.  Plus, he is the one who convinced me that we should all run for election and so he must follow through on this thought.  He has issues with residency (as he lives in the US), as does James Corbett, but I have worked to discover ways to fix the residency issue and I will share with them and any others who care to know.

Dan Dicks of the 6 million+ YT views, Press for Truth.  Dan is, what I call, the Luke Rudkowski of Canada.  Press For Truth is very well known and followed in Canada for its investigative reporting and exposing of governmental crimes.  Dan is also an anarcho-capitalist, past Anarchast guest and speaker at Anarchapulco.

Redmond Weissenberger, founder of the Mises Institute of Canada.  Redmond has been a leader in bringing free market, Austrian economics thinking, to Canada.  He also is the Managing Editor of TDV and one of the earliest Anarchast guests (episode #5)

You may notice one thing that all of these people have in common.  They are all incredibly smart, knowledgeable, well spoken and many have large audiences.  The chances of any of them being involved in a debate with an opposing statist politician and losing is approximately 0.000%.  It’s actually impossible.

Imagine Stefan Molyneux in the mainstream media in Canada talking about libertarianism and destroying his competition in debates.  Imagine all the other libertarian greats from Canada doing the same thing across the country.  Imagine the Libertarian Party going from almost not existing to all of a sudden having a candidate on the ticket in all 300+ ridings across Canada and the media having to cover this new uprising.  Imagine the Libertarian Party getting not only its first candidate elected but dozens, if not hundreds and how the world will take notice.  Imagine watching a live stream from Parliament where Tim Moen, Stefan Molyneux, James Corbett, Walter Block, Wendy McElroy, Dan Dicks, Redmond Weissenberger, myself and countless other philosophically and morally sound promoters of liberty make the statists in Parliament look like buffoons on a regular basis.

Imagine that this creates such a chain reaction that the Libertarian, or Anarcho-Capitalist, Party of Canada wins a landslide election and anarcho-capitalist, Tim Moen is Prime Sinister… but doesn’t actually sin by actively reducing the initiation of violence as far as he possibly can under the restraints of the public who will, as this happens, all become libertarian.

What happens then?  I don’t know but it can’t be bad for humanity!  The worst case scenario is that the Canadian public becomes awakened to the views of libertarianism and, much like Ron Paul effected, creates millions of new libertarians in the process.

For this reason I am going to wade into the raunchy quagmire of the political system and try to slay the beast of government from the inside.  I see no harm in doing so and nothing but good effects can come from it.  And, in the most desirable of circumstances, it changes the world, forever, away from slavery and towards the most peaceful and prosperous world than we have ever known.

If you do wish to play a role here are the key ways in which to do so:

Run for election.  This is obviously for Canadians only, in this context of this upcoming election.  The Libertarian Party of Canada has over 50 candidates already nominated but that leaves 250+ others to be filled.  If you are Canadian and believe in the tenets of freedom then please enter your validity and intention to run for the Libertarian Party of Canada.  It is simple and easy.  You can enter your intention to run on this page in a matter of minutes and help fill out the ballot across Canada which will be sure to garner a massive amount of attention to this libertarian movement rising.  If you are not Canadian then look to coalesce a similar movement in whichever tax farm you are bound to.

Donate.  If I understand the Canadian laws on political party contributions only Canadians can contribute to the Libertarian Party (LP) of Canada.  But, if you are Canadian, understand that the opposition has literally millions of dollars in donations to work with and the Libertarian Party, currently, has almost nothing.  If you’d like to support this cause then you can donate directly to the LP (donate here) it would be greatly appreciated.  Even the leader of the LP, Tim Moen, quit his job to focus on this fulltime and gets almost nothing monetarily in return for his efforts.  Every loonie counts and many of us are pulling our own weight.  In my instance, for example, I do not intend to accept donations for my candidacy (ever hear of a political candidate say that before?) and intend to fund it fully myself.  However, the LP can use any and all funds it can get to further the cause of liberty in Canada.

Support.  If you aren’t Canadian, can’t run and can’t donate you can still help.  Just support in any way you can via likes, shares, subscribes of any libertarian related content that many of us will be putting out in the ensuing months.  Just little things such as “liking” my Facebook page specially set-up for this election (click here to like) can help.

You will be hearing a lot more on this in the coming weeks and months including a planned “Liberty Bus/Train” cross-Canada tour and other events.

I won’t stop trying every angle possible to awaken the public to the beauty of liberty and this is just one of numerous ways I am trying to create change.

If you love liberty, ask yourself, “What am I doing to create the kind of world I’d like to live in?”  If the answer comes back blank then look to get involved in any way you can, wherever you are, to spread the message of liberty.

If you do we all benefit.

What’s your take on Jeff’s idea and plan?  Comment here.