In the wake of the continued coronavirus (hoax) induced panic we just witnessed the largest drop in the Dow Jones since the infamous Black Monday back in 1987 with the index crashing nearly 10% to below 21,200 points at its lowest point.

What came with this precipitous drop in equities was an absolute bloodbath in the markets across the board, ranging and affecting all major asset classes.

Bitcoin got battered down over 40% going below the $4,700 mark at one point and the crypto market capitalization as a whole dropped to just over $150 billion. 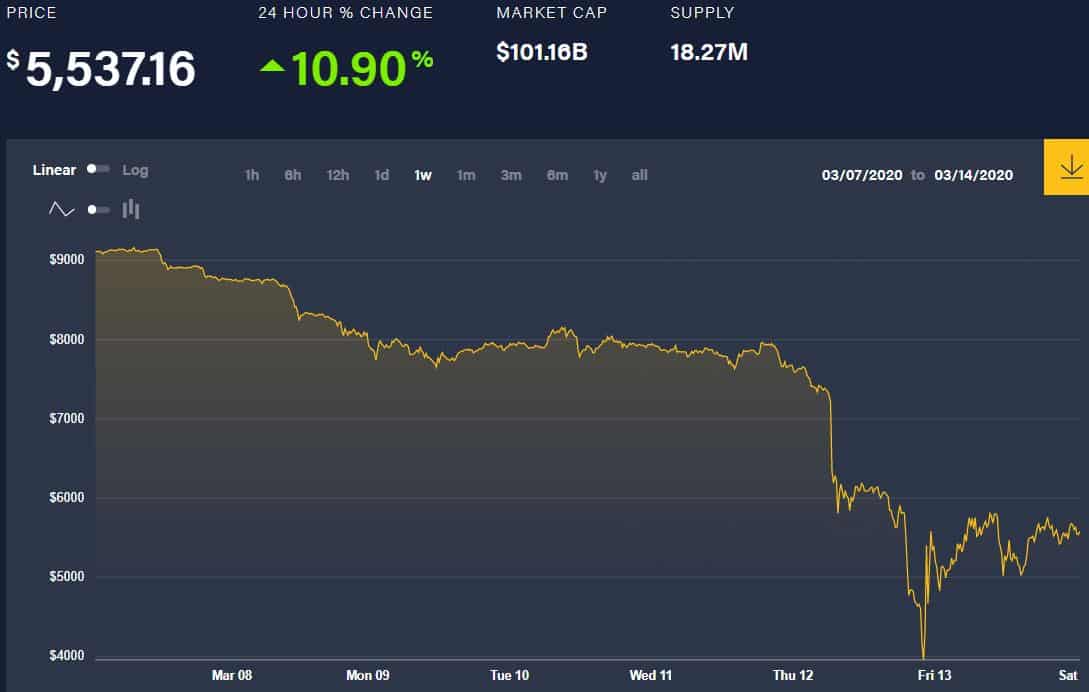 I had been telling subscribers since January to be prepared for this crisis and that cryptos would drop in the initial stages.  Here’s a snippet from our January Dispatch.

And that is exactly what happened.

Gold and Silver have also retracted back to around $1530 and $14.75 respectively, however as I have mentioned to subscribers in the TDV newsletter, the precious metals, despite also being affected by this downswing, will still be one of your best bets for retaining purchasing power and will be some of the least affected assets out there.

As I have always said, those who can defend and protect most of their assets throughout a massive crash will be the best ones off after all is said and done.

This means also holding cash. Whether it’s in a token form in something like Tether, or in cold hard central banknotes… as much as it kills me to say as the Dollar Vigilante, it’s important to have that kind of liquidity.

And just today, Donald Trump declared a national emergency due to the virus. By doing this he’s enabled the Federal Emergency Management Agency (FEMA) to “assist” state and local governments and coordinate the U.S. response to the crisis.

So what does this all mean to the common investor or man in general?

Well, one of the most unfortunate things to come of all of this, for me personally (as a big hockey fan), is the NHL suspended their season indefinitely, along with the NBA, MLS, and March Madness college basketball.

And, much in the same way that 9/11 was planned and orchestrated for the purpose of ushering in the war on terror and providing cover for the financial crisis of 2001, another event was needed to detract attention away from the current financial crisis being induced upon markets by the financial elite.

I always wondered what they’d do to top 9/11 – apparently they decided to design a virus and a complete propaganda effort to put the whole world into fear and cease most economic activity.

To hear my specific thoughts on how this is being used as a cover for the financial crisis which the globalists knew they had to make happen eventually, check out my walk and talk below:

I’ve been telling people for a long time this was coming.  And, now it is here.

And, it is just getting started.

To find out how to protect yourself from what I believe will dwarf the Great Depression in scope and profit from it as we have done, making 800%+ in the last few weeks, subscribe to the TDV newsletter HERE.

Or don’t.  I can only try to wake up those with ears to listen and eyes to see. The rest will likely be going down with this collapse.

Either way, see you on the other side. Maybe.