Beast System Goes Live – This Is It, Share Now Before Censored

Each day I feel like my understanding of virology and the underlying cause of this so-called “coronavirus” is growing clearer.

After doing quite a bit of research over the past week I have come to realize that everything I was ever told about viruses in school was a lie.

What a surprise, I know.

As I mentioned in yesterday’s blog, viruses are actually responses to cellular toxicity within the human body.

I came across a video done by a former higher-up at Vodafone turned whistleblower who exposed plans the elites had years ago to roll out 5G across the world. In it, he mentions how detrimental the high-frequency radio waves emitted from 5G towers are and the damage they cause to biological organisms.

But also, those who support the technology’s implementation knew how dangerous it was to human health.

Initially, there is no noticeable effect, but after about 6 months of constant exposure like the guinea pig subjects in Wuhan experienced, the body begins to break down and react adversely to the radiation poisoning.

As you may have heard by now, Wuhan was the first major city where 5G technology and towers were rolled out, sadly making it a testing ground for the technology.

As it turns out, very common side effects of radiation poisoning are “flu-like” symptoms.

Is it a coincidence that Wuhan is the supposed epicenter of this “outbreak”?

But, to hear more details regarding this technology and the ill-effects it causes, check out my walk and talk video in which I have included a clip from the very hard to find Vodafone boss’s video.

You can view that here:

On the financial end of this corona scam, things appear to be worsening in many parts of the world.

The latest bad news comes out of Egypt today where the Egyptian central bank has ordered all the nation’s banks to impose daily withdrawal and deposit limits on customers. 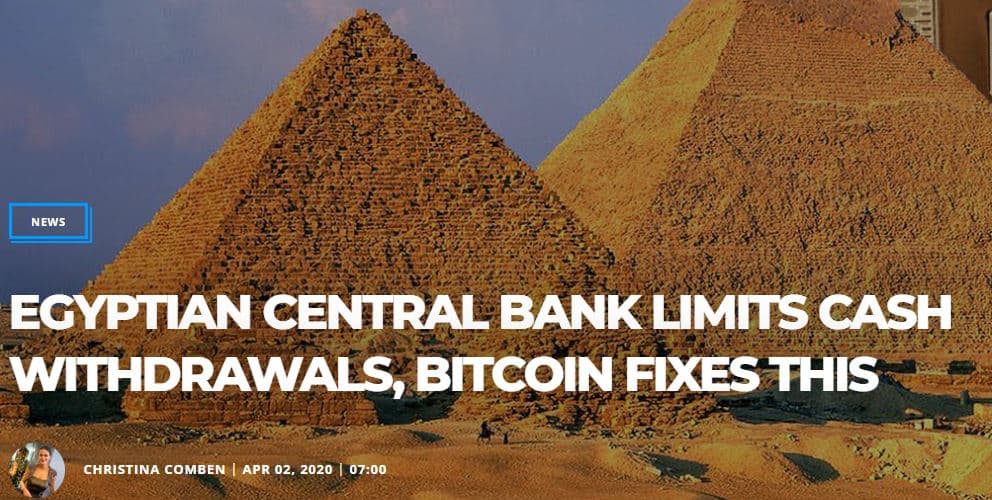 As we saw back in 2008 with the bank bail-ins in Cyprus and Greece, this is being done under the guise of “controlling inflation in the country and preventing citizens from hoarding cash during the pandemic.”

Gee. What would those poor Egyptians do without big brother to stop all the naughty cash hoarders!

Just another example of “why bitcoin”.

Of course, at TDV we know that the Central banks are the major facilitators of the boom and bust cycle and are what allow the elites to control practically every other facet of society.

In fact, right now, we’re beginning to see quite a crack up in the financial markets with many markets in the world closed or experiencing a massive downswing.

And on the surface, this bear market trend is being blamed on the coronavirus panic.

But we know that a market crash is long overdue at TDV and have been prepping for it for years.

Fortunately, we know just how to navigate such crashes that come along with the expansion and contraction of the money supply.

One of the best things you can do to protect yourself is to move your retirement funds into something like a self-directed or gold-backed IRA.

If you want to learn how you can protect your assets and even profit massively from said downswings, I’d recommend subscribing to our newsletter HERE.