Live Free or Die…It’s Your Choice

Live Free or Die…It’s Your Choice

It’s no secret that the current agenda on the table is to use Coronavirus prevention as a cover for the digital fascism of a totalitarian society. It’s also no secret that I’ve told you so – many times, over 10 years.

This is of course in line with 1984 – Orwell’s hit written 71 years ago, in which the inhabitants are kept safe from harm in the surveillance state as long as they obey Big Brother. This should have prepared us for the reality of a tightly controlled dystopia, but didn’t. Especially if you look at the ease with which the Coronavirus has, seemingly overnight, enabled governments all over the world to implement mass totalitarian surveillance under the auspice of creating weapons against disease.

Here are a few examples:

Russia – 100,000 facial recognition cameras are watching Moscow’s quarantine through a network of sophisticated state surveillance the city rolled out just before the pandemic reached Russia. Police have logged their locked-in citizens’ details and warned them that sneaking out could lead to a five-year jail term or deportation for foreigners.

Hong Kong – Hong Kong has introduced mandatory wristbands for those in quarantine so they can be tracked.

Taiwan – Taiwan has a monitoring system known as “the electronic fence” where those who are meant to be in isolation will be visited by the authorities if they turn off their mobiles.

South Korea –In South Korea, the government gathers huge amounts of data from phone records, CCTV images, and credit cards to help track citizens during the Covid crisis, while in Singapore, phone users are encouraged to download the “TraceTogether” app which keeps a record of all the other numbers that have been in close proximity to the smartphone.

China – China is boasting that it is building the “world’s largest camera surveillance network”.

But those are all foreign countries, you might say. It has nothing to do with me in my comfortable house arrest in front of my big screen TV. The United States will never become surveillance states…the constitution says so.

United States – Kill Gates’ digital certificates which are human-implantable quantum-dot tattoos are meant to hold records of people who have not been vaccinated. Oh, and then there’s Gates’ other undertakings – 1) ID2020 which will provide people with digital identity either through smartphones or RFID microchip implants; 2) human-implantable microchip implants that will allow women to control contraceptive hormones in their bodies; and 3) invisible ink to track child vaccination in developing countries – research funded by Gates in 2016, long before the coronavirus pandemic. 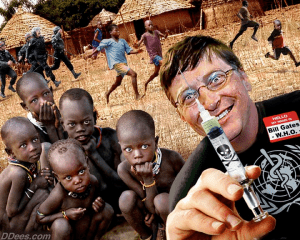 You see, your constitutional right to freedom went out the window when the signing of the Patriot Act “normalized the US government’s mass surveillance powers”. The only difference between the US’s mass surveillance and those other countries I mentioned, is that the US is doing a pretty good imitation of the Invasion of the Body Snatchers while they’re at it.

Watch the next episode of The Lucy and Jeff Show here and get your tacos ready because it’s good stuff like government surveillance, UV light experiments, Lucy in her best pink boating bandana, social engineering, murder of entire airlines, pensions funding business bail-outs, and that time I sank my boat off the coast of El Salvador — all set against a backdrop of Covert-19.

What once were considered inalienable, fundamental “rights” are now mere privileges to be taken away on a government bureaucrat’s say-so. This is because governments the world over have learned a lesson they won’t ever forget: At the first sign of danger, people will gladly give up their freedom in exchange for safety, or the perception of safety.

Don’t be that person. LIKE this video, SHARE it everywhere you can. Make sure you stay in touch with us by signing up to our free email list at https://dollarvigilante.com

Follow The Lucy and Jeff Show on https://www.facebook.com/LucyAndJeffShow, or sign up to our Bitchute Channel to make sure you don’t miss an episode, which is the only place you’re going to be able to see our full videos which aren’t blocked by YouTube. Sign up on https://www.dollarvigilante.com/bitchute

And finally, if you like the idea of “live free, die rich”, subscribe to The Dollar Vigilante newsletter at https://www.dollarvigilante.com/subscribe for expert tips and discussions on the only ways you can take advantage of the current cluster farce and make money. For instance, by earning LBRY Credits (LBC) simply by watching our LBRY Channel on https://www.dollarvigilante.com/lbry

And don’t forget…I told you so.