A Solution for the UK Student Riots

I had grabbed a snack and sat back in my lounge chair to watch the English riots on TV… something I expect to be doing a lot more of in the coming months and years.  It was a good one this week.  A bunch of people calling themselves anarchists, but apparently having no idea what the word “anarchy” means – were angry at the government for raising fees at publicly subsidized schools.

Of course, anarchists, of which I am one, and I can assure you I have nothing in common with these people, are people who want to live without a government controlling them or owning them.  This is freedom in its truest sense and here at TDV, we are all about freedom – the most noble of causes.

Gold, Guns and Gettin’ Out of Town

Thank goodness for the internet.  Without it all we would have is the propaganda dispensed by mass media, which owns and/or is owned by the government.  But with the internet all 6 billion+ human inhabitants of this fine planet can easily create interesting and innovative ways of voicing their point of view.

?On November 9th the Chicago Mercantile Exchange said it will raise its silver futures trading margins by 30 percent to $6,500 an ounce from $5,000 an ounce effective November 10th setting off a rapid sell-off in the metal.  No other margin requirement on any other metals was changed.

But, where is the supposed volatility in Silver?  The chart below shows an incredibly orderly upward rise in silver.

Bureaucracy Is Destroying America: Proof in 2 Pictures or Less

Are you confused as to why once-free America seems to be imploding more by the day?  A picture truly is worth a thousand words. The following chart is actually supplied by a Joint Economic Congressional Committee of the US government explaining how the new Obamacare Health Care system will be structured (click here to see a zoomable version):

Market Update and Special Report: How To Own Gold

Another day, another all-time high for gold.  It seems like this has been going on for months now – and in fact it has.  Just check out the beautiful chart below: 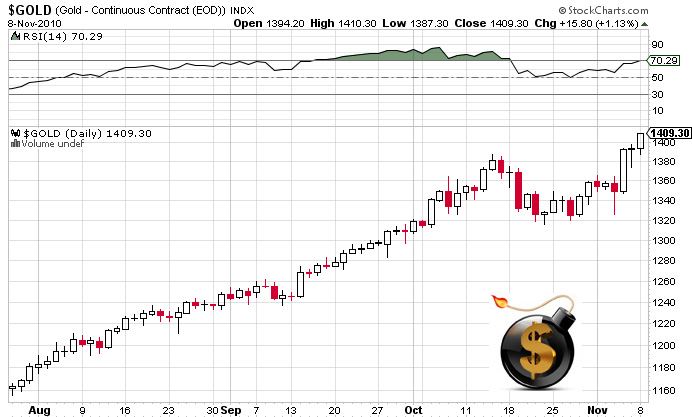 We rarely take much opportunity to pat ourselves on the back here at TDV but I think some patting is in order!  For one, congratulations to our Senior Analyst, Ed Bugos, on gold surpassing his 2010 target price, two months early in fact.

And, for our subscribers, just look at the great gains in our portfolio (stock names removed):

How I Learned to Stop Worrying and Love the Inflation

Ben Bernanke set off a firestorm this week when he announced he was going to start devaluing the US dollar even more aggressively than normal.  Gold rose from $1,355 at the start of the week to close at $1,393.50 after hitting an intraday high on Friday of $1,398 (at which point we officially say “close enough” and congratulations to our Senior Analyst, Ed Bugos, who predicted gold would hit $1,400 in 2010 a year ago when it was at $1,100).

Central bankers and government officials around the world signalled their great displeasure at this radical action by the Fed and Ben Bernanke wrote an op-ed in the Washington Post yesterday to explain his “reasoning” behind entering the dollar into hyperinflation.

Remember WKRP in Cincinnati?  One of the funniest sitcom episodes in the history of television is the episode of WKRP in Cincinatti where Arthur “Big Guy” Carlson and Les Nesman have a thanksgiving day promotion and decide to “let loose” turkeys out of a helicopter above a supermarket parking lot.  As anyone who has seen the episode can attest, chaos ensues!

Political POTpourri, Bennie and the Feds & the Last Free Place on Earth

Coming off of the American elections yesterday there were a number of results worth some comment.  Let’s proceed:

Democracy is Dangerous… and Stupid

As Americans go to the polls today we only have a passing interest.  Both of the US political parties stand for big government and, as Barack Obama showed, it matters not what color tie they wear or whether their teams mascot is a donkey or an elephant.  Once elected they will continue to work towards more government and work for their owners, the big banks and corporations.  Not that it will matter much longer anyway, since the US government is now beyond bankrupt and have taken many Americans with them.

Halloween Prepares American Children for a Life of Extortion

Today is Dia de los Muertos (Day of the Dead) in Mexico, a long standing tradition.  Scholars trace the origins of the modern holiday to indigenous observances dating back thousands of years and to an Aztec festival dedicated to a goddess called Mictecacihuatl.

Why is the Public Still Blind to Gold?

Given the fact that nearly every major government and central bank in the world has come right out and said that their #1 priority is to reduce the value of their currency, you would think that the “general public” may move some of their assets away from fiat currencies and government debt denominated in those currencies.

Well, if you thought that, you’d be wrong!

The crisis in Europe is far from over and it is getting worse as France has joined Greece and Italy as a place of near daily dissent.  3.5 million people joined marches around France today to protest against President Nicolas Sarkozy’s plans to raise the retirement age from 60 to 62.

I am feeling chipper today.  I can’t say exactly why or how but thoughts are flowing with ease and I feel great.  I didn’t do anything out of the ordinary today or yesterday and this is the first time in weeks our stock portfolio has ticked down so I can’t find any reason for my zeal – not one that is obvious to me anyway.  I’ll just take it as being part of the energy and cycles of life – I was out and about today and everyone was smiling and happy.