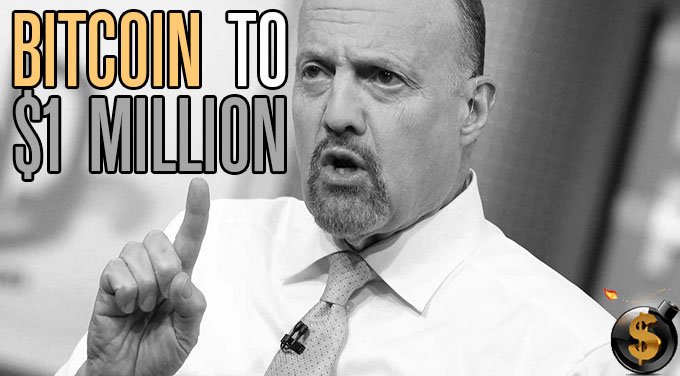 The thing with FakeStream media is that the few hundred people left who still watch it are mostly vaccinated, fluoridated and dumbed down in 12 years of communist style government indoctrination camps.

So, the people who do watch have no idea what kind of absolute garbage they are watching. You could probably sit them in front of an Etch-A-Sketch with the word “stocks” crudely written on it and they wouldn’t notice a difference between that and CNBC.

That must be the only reason Jim Cramer still even has a job.

Only in a world where the audience are brainwashed zombies could Jim Cramer say “Bear Stearns is fine” when it was trading at $62 in 2008… and then six days later, the company was sold to JPMorgan for $2/share… and Cramer still has a job to this day at CNBC!

So, when we heard Jim Cramer just said on CNBC that bitcoin was going to $1 million we shuddered!

Everything Jim Cramer says is completely moronic and usually totally wrong… and you can usually make money by doing the exact opposite of what he says. So it was very worrisome to hear that he thought bitcoin was going to $1 million.

Then I watched the video.

Phew! His reasoning for why bitcoin will go to $1 million is the most ludicrous, insane thing I have ever heard… which is par for the course from eardrum cracking Cramer.

According to him, bitcoin won’t go to $1 million because it is a paradigm shift and evolution in money, banking and finance.

No, the reason it will go to $1 million per bitcoin is because people will need it to pay blackmail!

He said, “I think it could because the European banks are frantically trying to buy them so they can pay off ransomware. It’s a short-term way to be able to deal with cybersecurity. It is the way to pay off the bad guys.”

CoinTelegraph.com blew this theory out of the water within seconds:

In the case of WannaCry ransomware, the biggest ransomware attack in history, the distributors earned less than $100,000. That is only 0.0012 percent of the European Bitcoin exchange market. Thus, to say that Bitcoin’s price is rising because of 0.0012 percent of traders from the fifth largest Bitcoin exchange market is not an accurate depiction of the surging Bitcoin price.

Not to mention, we already outed WannaCry as a globalist false flag.

So, no need to panic sell bitcoin. Cramer did say it would go to $1 million BUT his reasoning was perhaps the most ridiculous thing we’ve heard yet about bitcoin. He almost makes the Health Ranger look like a bitcoin genius.

There are some good reasons to speculate that bitcoin could eventually be worth $1 million. In fact, I did that all the way back in 2013 in my article, “The Dollar Is A Barbarous Relic: The Rise of Bitcoin.”

In it, I made the case for why the US dollar and all other fiat currencies will be worthless in the coming decade. And then just did the basic math on what bitcoin would be worth if it replaced the US dollar and was used worldwide as currency.

Here is what I said:

“In 10-15 years, if things go well, Bitcoin will be real money, accepted worldwide and it will be worth the equivalent of $1 million in today's dollars (and, of course, the dollar wouldn't be anything but a bad memory then). Where do I get the $1 million figure from? Well, there are many ways to attempt to calculate the value of a Bitcoin but if you make the assumption that in 10-15 years Bitcoin is a worldwide used currency, much like the US dollar is today, then all you need to do is look at the total dollar value of US dollars outstanding (which depending on your method of calculation could be anywhere from $4-12 trillion) and divide by the total amount of Bitcoins outstanding. Let's use the $12 trillion figure, for ease of use, and let's assume there are 12 million bitcoins outstanding in 10-15 years, also for ease of calculation. That number works out to $1 million per Bitcoin.”

The fact that, four years later, Jim Cramer is on CNBC talking about bitcoin going to $1 million to pay blackmail is hilarious in just how behind the times they are.

I actually appeared on CNBC in 2013, my only appearance, and while they acted like bitcoin was weird and scary I finished off by saying that the current monetary system is much more scary than any ideas they have about bitcoin.

They’ve never invited me back since. Apparently you aren’t supposed to let people know about the coming dollar crash ahead of time.

No big deal though… The Dollar Vigilante has about the same total audience as CNBC does on the internet now anyway!

If you still don’t fully understand cryptocurrencies here is a special discount to our newsletter and access to our book, Bitcoin Basics here.

And, also I’ve done a special 4-video series showing why cryptocurrencies are so important. If you watch them all and want to get more info afterwards we’ll send you your first $50 in bitcoin directly from me, personally.

Don’t be like the Health Ranger and Jim Cramer and look like an idiot in public with no knowledge about cryptocurrencies. Check out our bitcoin book and free 4-video series above.

No matter what you do, though, turn off CNBC and the television programming. It’s called programming for a reason. Stick with us here at dollarvigilante.com and steemit.com.

Speaking of Steem… you may recall our article, “Steem Explodes Higher… It’s Time Everyone Looks at Steemit Again” from just a month ago.

Turn off Cramer and CNBC… and stay tuned here for more!