Prepare For The End of Governments, Says Immortal Technique [VIDEO]

Bold words… especially when you consider they were spoken nearly two decades ago, just a couple years after the staged September 11 attacks—deep in the Orwellian era of the Iraq War.

And even more so when you realize they were said by a rapper who was paving a serious dent into the world of hip hop with insanely catchy music filled with conscious messages and important questions.

He’s known as Immortal Technique, a name that exploded on the underground scene and spread virally at a time when the internet was hardly as mainstream as it is today.

“In my early teen years… I realized that there’s really no such thing as a ‘government,’” says Immortal Technique in episode 451 of Anarchast, “that it was simply people who ruled over other people, and found creative uses of systems to implement in order to create a buffer between the people that make everything happen.”

Music to my ears…

Although he doesn’t straight-out use the term “anarchist” to describe his political views, and although he acknowledged some of his past album artwork could be misconstrued as “communistic,” I was fascinated by his views on Karl Marx and European “socialists.”

“For a long time, what people called ‘a left leaning influence’… I would challenge that and say that Karl Marx, who’s seen as the father of communism… and I have this debate with all my leftist friends, I’m sorry but, the people of Latin America and Africa, the indigenous people, we really didn’t need a European man from the 19th century to come to the dark jungles of Africa and Latin America and explain to us the complex concept of sharing… we knew what that was for thousands of years…”

Can’t argue with that.

It sounds like Tech is alluding to the ironic tendency of first-world European liberals to “fight racism” and oppression by wagging their finger at “minorities” and telling them how to think and behave.

Immortal Technique and I talked about everything from modern political theater, illegal immigration, and preparing for permanent government shutdown, to the illuminati as faceless corporations, the rap industry and “selling out”.

It was really a no-brainer to have this man on for an interview and pick his brain, just as it was the perfect fit to book Tech to perform on Valentine’s Day at Anarchapulco 2019. 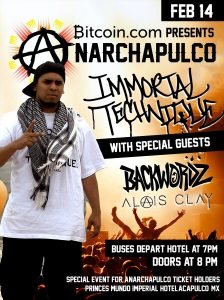 That’s right! Last year we hosted incredible performances by the likes of Wu-Tang Clan members Sunz of Man (big proponents of cryptocurrency), and this year’s main concert will feature Immortal Technique on stage and on fire with his powerful combination of entertainment and enlightenment.

Of course, we’ve also got a remarkable lineup of guest speakers presenting between February 12-17, including Ron Paul, David Icke, Andrew Napolitano, Cynthia McKinney, and so many more.

For those who can’t make it to the TDV Summit or Anarchapulco, you can still experience every speech in real-time. Enjoy The World’s Premier Liberty Event from the comfort of your own home! Check out the virtual livestream event now: https://dollarvigilante.com/virtualsummit