CORONAHOAX: Preparing For What’s Next

This is very serious!

Not the Coronavirus, itself.  That seems to be the least worrisome thing happening.

What governments worldwide are doing in response to this supposed epidemic, though, guarantees we are heading into a complete and total worldwide economic collapse far worse than the Great Depression in 1929.

And, it is going to get worse by the day as more and more propaganda and government lockdowns occur.

The Prime Murderer of Kanada, Justin Trudeau, who is literally an actor is playing his role and acting like he is in self-quarantine after his wife has supposedly come down with the coronavirus.

Then Rudy Gobert, an NBA player who apparently also has coronavirus, posted an apology Thursday for his “careless” behavior after having joked with members of the media by making sure to touch all the microphones and recording devices that the reporters had placed on the table in front of him as he left a news conference.

He later said. “I hope my story serves as a warning and causes everyone to take this seriously.” After having had just played in the game and sprinting up and down the court.

The guy looked completely fine! He looked just as well as Tom Hanks who also supposedly has the virus along with his wife. 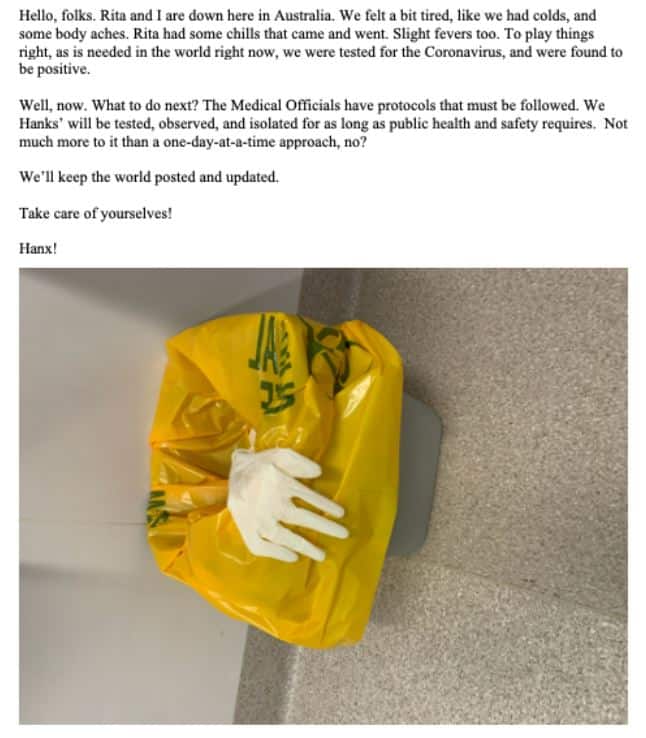 And, the mainstream media and the globalists couldn’t let this happen without somehow tying it into “global warming” or “climate change”… another hoax.

One important thing to remember is that even the numbers put out on the government statistical sites are likely doctored and manipulated to reflect a graver situation than is actually occurring. But even if you do believe their numbers are accurate, they’re not even that bad! Death rates and contraction rates are extremely low.

It wouldn’t surprise me to find out that these numbers though, are entirely inaccurate and just the opposite of what’s actually going on.

It is kind of like how they manipulated AIDS statistics or say the purpose of central banks is to protect economies from the boom and bust cycle when in reality they’re the sole cause of them.

Because we knew we were long overdue for a stock market crash, (not because of corona) just last week we profited tremendously by correctly calling for subscribers to short the market. It just so happened that corona was used as the cover for this downswing which led us to make over 800%!

And, things are going to get far crazier from here (which means major profit opportunities as well).

Check out my full walk and talk video below to hear my thoughts on how this thing is going to continue to unfold and how you can keep you and your family safe:

Part of what I think the endgame is; knowing the mentality of the globalist types, they’d like to keep up the panic they’ve started until they can release their vaccine which is being developed by a company out of Israel… what a surprise.

And those behind it will grow very rich upon its release while those who end up taking the vaccine will ACTUALLY end up getting very sick.

But, we’ll see what the actual repercussions end up being health-wise and financially.

The NHL, for instance, is likely to lose upwards of $300 million dollars in revenue and the NBA and MLB will likely lose even more, considering they have even larger fan bases.

But just because mainstream companies and franchises are losing money doesn’t mean that you have to!

Just stick with us here at TDV and get advice like the call that helped our subscribers to make over 811% in just days, by subscribing to our newsletter HERE.