The Spell Was Cast at the 2012 Olympics in London

Corona. The “Crown” virus. Supposedly named such after it’s peculiar visual similarity to a crown. Then you watch the opening of the 2012 Olympic Games in the United Kingdom and its rows and rows of nurses and doctors dancing triumphantly among the ill with the “virus” scurrying away – defeated by the NHS, that stalwart symbol of the British Crown Family’s fortitude in times of “a bit of bother”. 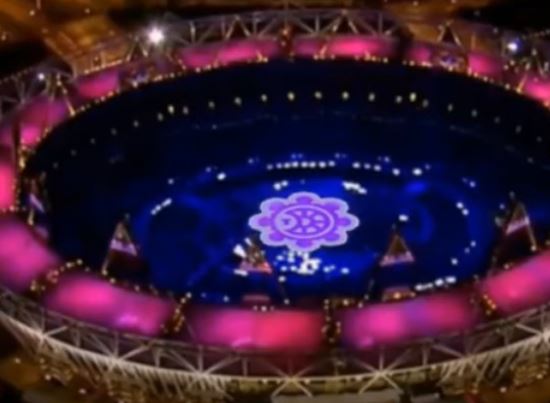 There’s actually a phrase for what was the freakiest and most seemingly inappropriate Olympic opening the world has ever seen – eight years ago. It’s called predictive programming, and it’s when governments or other higher-ups use far-fetched concepts in movies or TV (or events) as a mass mind control tool to make the population more accepting of planned future events.

Result? If and when these changes are put through, the public will already be familiarized with them and will accept them as natural progressions, lessening possible public resistance.

So what would the motive be behind predictive programming?

Sound familiar? Think of every dystopian story you have ever seen. Outbreak, Quarantine, Hunger Games, The Handmaid’s Tale – the list goes on and on. Because we’ve been brainwashed ahead of time, we understand how viruses work and how they can destroy the whole world if we don’t listen to our masters by staying locked up in our houses.

I’ve been saying this over and over again. And on my walk and talk with Lucy today I’m saying it again: You need to act quickly – events are unfolding at a rapid pace, and the window of opportunity is closing. Fear is the enemy, truth your weapon.

If you want to hear more about why Covid-19 is the biggest experiment in mass mind control the world has ever seen, and why we must stop reacting like rats in a maze, check out the video below.

And while I’m talking of experiments – think Bill Gates’ digital ID implants is a new idea? Think again. At the same Olympics in 2012, they implemented an international surveillance system, in partnership with the WHO, unlike anything ever attempted, until now…

There’s no bigger threat to tyrants than well-informed citizens, who understand their own power, and freely communicate with others like them. If you want to get out of your house and pick up your life, or even make it better, be fearless. Like this video and share it with everyone you know!

There are many definitions of wealth. But if you want the kind of wealth which will allow you to be free from the dictatorship of any boss, or government, or even economy, become a member of The Dollar Vigilante where we talk about the kind of manipulation that’s going on in the world and how to profit from the chaos.  You can subscribe on www.dollarvigilante.com/subscribe for over 40+ pages of in-depth financial and geopolitical analysis which we release every month to our subscribers.

Or find out how fairly modest investments in the right cryptocurrencies will help you along your way to becoming financially free! We have extended the deadline to subscribe to The Crypto Vigilante on www.dollarvigilante.com/tcv for one more day. You have until tomorrow to become a member and get the very best crypto currency advice from a large number of experts every month!

“A rat in a maze is free to go anywhere, as long as it stays inside the maze.”

Don’t give anyone the power to make you think you’re a rat.